There is only one piece of this product please leave us your offer.

Diogenes also known as Diogenes the Cynic (Διογένης ὁ Κυνικός, Diogénēs ho Kynikós), was a Greek philosopher and one of the founders of Cynic philosophy. He was born in Sinope, an Ionian colony on the Black Sea coast of modern day Turkey, in 412 or 404 BC and died at Corinth in 323 BC.

Diogenes was a controversial figure. His father minted coins for a living, and Diogenes was banished from Sinope when he took to debasement of currency. After being exiled, he moved to Athens and criticized many cultural conventions of the city. He modelled himself on the example of Heracles, and believed that virtue was better revealed in action than in theory. He used his simple lifestyle and behaviour to criticize the social values and institutions of what he saw as a corrupt, confused society. 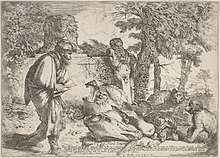 Diogenes made a virtue of poverty. He begged for a living and often slept in a large ceramic jar, or pithos, in the marketplace. He became notorious for his philosophical stunts, such as carrying a lamp during the day, claiming to be looking for a man (often rendered in English as “looking for an honest man”). He criticized Plato, disputed his interpretation of Socrates, and sabotaged his lectures, sometimes distracting listeners by bringing food and eating during the discussions. Diogenes was also noted for having mocked Alexander the Great, both in public and to his face when he visited Corinth in 336 BC.

Diogenes was captured by pirates and sold into slavery, eventually settling in Corinth. There he passed his philosophy of Cynicism to Crates, who taught it to Zeno of Citium, who fashioned it into the school of Stoicism, one of the most enduring schools of Greek philosophy. No writings of Diogenes survive but there are some details of his life from anecdotes (chreia), especially from Diogenes Laërtius’ book Lives and Opinions of Eminent Philosophers and some other sources.

This work was inspired by Diyogenius. The product is completely handmade and the only one produced it is therefore unique. There is no chance of any other being like it.  The product will be offered for sale through tender procedure. It will be given to art lovers who make the highest bid.

It is definitely not a bronze product.

This work has emerged as a result of a serious accumulation and effort. Considering the income from the sale, the artist’s time and effort for the work will be considered in  the proposals to be made so that the artist can sustain his artistic life.

The inspiration for these works was interpreted through the metaphors, teachings and lives of famous philosophers. In fact, I have integrated and ossified the sentences that will leave an impression in every reader’s mind with my own art and sculpture world. From my point of view of art, it will not be the first, and will not be the last, it is like a written poem from my soul.

Sculpture to me, means creating a formation by using literatüre and music many times. This is the way I define myself as an artist.

Sculpture also mean to me, juıst like drawing a fine line in geometry and reaching a conclusion, when you draw a line in geometry, a problem is solved, a conclusion is drawn. Just as when when words and sentences are put together in Geometry and Literature,  a composition is written, such is Sculpture to me. Different materials can be used to make art, sometimes even a piece of scrap can be a complementary element to an artifact. A thread can be made from a string, ceramic, porcelain from a clay, or epoxy, polyester, glass can find life, in art. A sadekar can make magnificent bone combs, a turtle shell spoon or bowl. Compared to other components, Polyester is relatively faster, easier and less demanding on equipment, and it is  easy to level. It has no complications like glass material. This does not however mean that, of course, Polyester sculptures can be re-molded and technically transformed into glass sculptures.

WhatsApp Chat is free, download and try it now here!